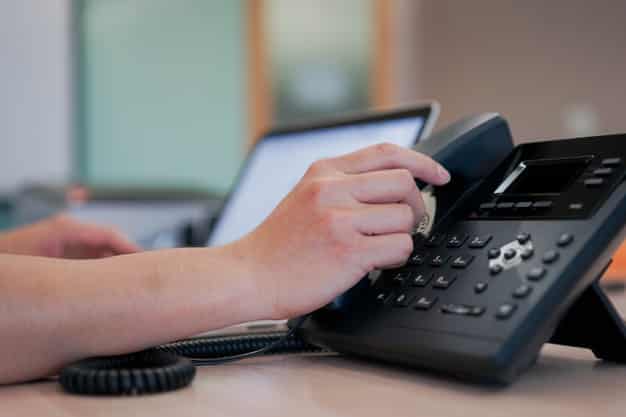 Managed business phone providers deal mainly in voice-over-IP (VoIP) technology, which means they push cloud deployments almost exclusively since that’s most effective for them. And to be fair, it’s usually easier and cheaper for their customers as well, especially most small to midized businesses (SMBs). But the cloud still isn’t a universal solution for every organization. There are several reasons why your particular operation might not want its communications living in the cloud or at least not all of it.

On the other hand, a completely VoIP-based business phone system is certainly possible. All you need are some VoIP phones, a network, and some sort of private branch exchange (PBX). A PBX is a private phone system that operates within your organization, and is used to provide internal communications and also to connect to the larger telephone network outside. Making the decision between Hosted vs. on-premises voip pbx system can be a challenge, but this guide will help.

The PBX itself may be a server in your data center or perhaps in your phone closet, or it may be a cloud-based server. It needs to be running specialized software that’s able to direct voice calls from their origin to their destination. It does not matter where the server is located for your employees to make phone calls, which is why a cloud-based PBX can be a rational alternative.

But there are other considerations. One big factor is cost. “In a public cloud [or Unified Communications-as-a-Service] or UCaaS model, the financial expense is the primary driver,” said Daryl Reva, Vice President of Cloud Marketing at Mitel Networks, which makes both cloud and on-premises phone solutions, including Mitel MiCloud Business. A great deal also depends on the size of the organization. He said that smaller organizations may find greater cost benefits from a cloud-based VoIP solution.

The simple answer is that the initial cost of a cloud-based phone system is frequently lower than one that’s on a server in your office. The reason is that you don’t have to buy the PBX. But over the long run, it may be more expensive because you’ll have to pay ongoing fees to operate and administer the PBX, just as you would any other cloud service.

On the other hand, a true unified communications system may be better as a cloud solution. UCaaS requires facilities and skill that you may not have in your company, and it may be that getting those services in the cloud may be the only feasible option for you. That’s because, while UCaaS has great cost savings potential, it’s primarily a software solution, which will likely require custom integration, DevOps-style management, and additional software management support.

But those aren’t the only reasons. “If the vertical business is dictating your choices, such as healthcare and finance, then compliance controls your objectives,” Reva explained. This means that, before you can run your phone system in the cloud, it must meet compliance regulations, and not all cloud-based phone systems can do that. You’ll need to spend more time with your legal team to determine the exact compliance requirements for your infrastructure, and this is something you should do carefully as mistakes here can be expensive.

Other Factors to Consider

There are other factors that may govern your decision. For example, if you’re located in an existing environment with an existing analog phone system, you may not want to throw away hundreds of analog phones that are still in good working order. This means that, while you’re moving to a VoIP system, you still need to use analog phones.

While a VoIP adapter can make any analog phone into a device that can exist on a digital network, it may make more sense to use an interface that lets you connect most of your analog phones to your VoIP network. While those phones may not have all of the features of a VoIP phone, they can still make phone calls, and that may be all you need. Then you can spend the money on VoIP phones where they’re actually needed.

Reva also noted that some forms of functional hybrids have the basic PBX on premises while some advanced functions, such as collaboration, are in the cloud. What this means is that, while you’re hearing a lot about cloud-based VoIP solutions, that’s not the only option. Plus, for your organization, it may not even be the best solution. Instead, it’s important to base your VoIP system on what makes the most sense for your company, which may be on an on-premises server.

The primary considerations are the cost, how much control over the phone system you want, and whether or not there are considerations such as compliance. You don’t have to buy a PBX to use one in the cloud, but if you don’t, then you may pay more per month over time. You may not get a lot of control over a cloud-based system because the provider may choose when features are applied or changes are made, and a cloud-based system may not meet your compliance requirements.